Where it is located: Little Village is a neighborhood in the South Lawndale Community Area. It is marked by number 3 on the Walk Location Map.

How we got there:   We drove and parked on Marshall Blvd. (see map below) or you can plan your trip on public transportation here: CTA Trip Planner

Comments from Marge: This is one of the most unique walks you will take in Chicago. When most hear of the location “26th and California” thoughts instantly go to the large Cook County Criminal Courthouse and crime. South Lawndale’s violent and property crime is lower than where I live, in the Near North community area. In addition, Little Village is a featured neighborhood on the Chicago Tourism website “Choose Chicago” , the official destination marketing organization for Chicago. With that out of the way (and you can always check the latest crime stats at the Chicago Trib),  I hope you will make it a point to visit here.

Little Village is truly authentic in its Mexican ethnicity. Hipsters, art galleries and trendy restaurants have not yet invaded the neighborhood. Storefronts display pinatas and quinceanera dresses, homes have shrines in their front yards and murals adorn many building facades. Remnants of the area’s history before Mexican immigrants started arriving in the 80’s can be seen in a Prairie style field house or the homes of former famous residents, Anton Cermak (former mayor of Chicago) and John Shedd (for whom Shedd Aquarium is named). One of the most interesting aspects of this neighborhood is the imposing Cook County Criminal Courthouse and Jail. On one visit, we took a wrong turn and ended up walking around the entire complex. It left an impression! That is another very unique opportunity this walk can provide if you want to take the time.

Comments from Ed: I call this walk one of our Deep Tracks.   Like an overlooked song on a hit record album, this area is misleading.  Only by walking these streets can you connect with the vitality of Chicago life today. When you walk 26th street you are more in Mexico than America.  It is a safe and stimulating area for the curious and open minded.  The justice complex at 26th and California is the scene of millions of criminal justice dramas.   Due its function, it, too, is very safe.   Stand across the street and see humanity struggle with crime, poverty, and disadvantage.  It is hard to remain unchanged.  There is also rich Chicago history on this walk.   For a Chicago native or die-hard urban explorer, this may be your favorite walk.   It’s one of ours. 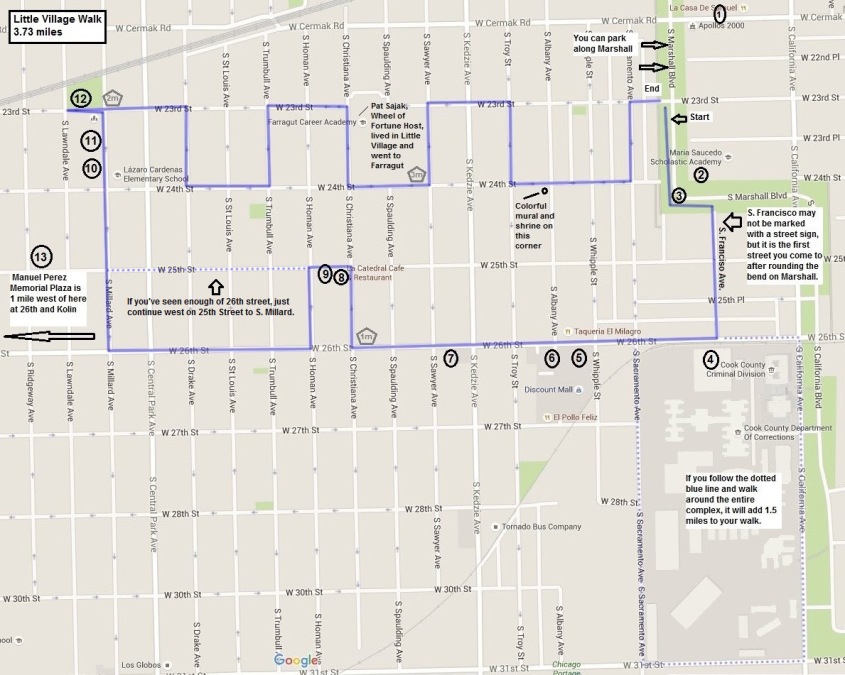 Little Village is a neighborhood centered on 26th St. in the South Lawndale Community Area.  It is predominantly populated by Mexican Americans and new Mexican immigrants to Chicago. It was originally settled by Irish and Eastern European immigrants in the late 19th century, after the Great Chicago Fire sent the population of Chicago rippling out from the city’s center to the outlying countryside. Jobs created by industrial development in the early 20th century also attracted residents to the Little Village area, adding to the community’s strength and viability as its own independent borough. By the mid-20th century, Little Village saw a marked increase in Polish immigrants escaping the ravages of war-torn Europe, and in the ’80s a large influx of Mexicans moved to the neighborhood. Many of these new residents were transplants from neighboring Pilsen. They were displaced during the construction of the University of Illinois Chicago campus, which chewed up a large section of residential land, pushing inhabitants further west from downtown. But it is the injection of Latino culture that gives the Little Village neighborhood its vibrant and distinct character today. In fact, the neighborhood is called “Mexico of the Midwest” by many of its residents.

This art deco building was originally the Marshall Square Theater, opened in 1917 as a vaudeville venue, later a silent movie theater, and currently a venue of banquets, weddings, and Latin music under the name Apollo’s 2000. Note the tragic placement of the strut for the Apollo’s sign right through the face of the beautiful terra cotta goddess above the main entrance.

Formerly the Carter Harrison High School, this massive school is now an elementary school, named for Maria Saucedo, an area teacher who died in a fire in 1981. Carter was the alma mater of clarinet player Benny Goodman and newspaper columnist Irv Kupcinet.

Herman Atkins MacNeil completed this sculpture of Marquette and Joliet in 1926 under a commission from the Benjamin Franklin Ferguson Monument Fund. Benjamin, a Chicago lumber baron, left a million dollars in his will of 1905 for the purpose of erecting and maintaining enduring statuary and monuments along the boulevards or in other public places. Between 1905 and 1931 the Fund placed 10 sculptures throughout various parks and beltways of Chicago.

The Cook County Department of Corrections (CCDOC) is one of the largest (96 acres) single site county pre-detention facilities in the United States. Primarily holding pre-trial detainees, the Department admits approximately roughly 100,000 detainees annually and averages a daily population of 9,000. It was located here due to the clout of the neighborhood’s famous citizen, Anton Cermak: businessman, political boss and mayor of Chicago. A suggested addition to this tour would be to walk completely around this complex. The enormity of the place, the barbed wire, the guard towers and the tiny windows are foreboding and chilling. It will leave an impression.

This place is a real experience, with what seems to be hundreds of vendors crammed into nooks and crannies and aisles throughout the vast warehouse. Lucia Ahrensdorf of The South Side Weekly put it best: “Need to replace the rusty carburetor in your car and pick out a wedding dress at the same time? Look no further. Want to give yourself a tattoo? Tattoo kits are available for only $250. There is no better place to pick out an intense Halloween costume, or else browse for formal attire. Little Village Discount Mall showcases all the options for elegant toddlers, including tiny tails, tiny mariachi suits, and fluffy, white, First Communion dresses. So when you’re looking for an industrial-sized mixing bowl for the next time you want to make soup for a thousand people, BMW-brand cleats to kill it at your next fútbol match, or a tiny green parakeet to sing you to sleep, you know where to go.”

This arch welcomes you to Little Village. The clock in the arch was given by the Mexican government in a visit by Mexico’s president in 1991, but has only worked intermittently in the years since then. It has been repaired, only to break again. Whether to repair it or get rid of it is a subject of controversy.

You might be surprised to know that this 2 mile stretch of 26th street is second only to Michigan Avenue as the highest grossing shopping district in the city. Family owned bakeries, restaurants, clothing stores, grocery stores, and barbershops give the Mexican American residents the food, clothing and household goods of a country they left behind.  On the weekends there is an influx of Hispanics from suburbia and the entire Midwest shopping for goods that remind them of home. Take a leisurely stroll and take in sights that you will see in few places outside of Mexico.

The décor is religious artifacts and worth a look see. The restaurant is very popular. We were there on a Sunday around lunch and it was interesting to see all the young couples waiting for a table for brunch. It could have been Wicker Park or Logan Square!

This restaurant is connected to La Catedral, but its entrance is on 25th Street. The chef is the same for both restaurants. If La Catedral is packed, you can find a table here and enjoy a wide range of quesadillas.

Anton Cermak, businessman, party boss and mayor of Chicago from 1931 – 1933, lived here from 1923 until his death in 1933. The home was put on the National Register of Historic Places in 2011. He was Chicago’s only foreign born mayor, born in Austria-Hungary (now the Czech Republic) in 1873. On February 15, 1933, Cermak was in Miami with FDR on a presidential campaign trip and was shot by a bullet intended for FDR. The mayor lingered for 20 days before dying. The story goes that Cermak told FDR in the hospital, “I’m glad it was me instead of you”. 22nd Street was named Cermak Road after his death.

Cermak lived in this neighborhood from the time he was 19 and had strong ties to the then largely Bohemian neighborhood. When his body was returned to Chicago, it stayed in this home for visitation the day before his funeral. On a freezing winter night, hundreds of neighborhood people lined up in the cold to see him one last time. Cermak is buried in the Bohemian National Cemetery in Chicago.

One last interesting fact is that his son in law was Otto Kerner, Jr., the governor of Illinois from 1960 – 1968, who was subsequently jailed for a couple of years after a bribery scandal.

This Queen Anne home that John Shedd built and lived in from 1888-1906 is remarkably intact, retaining its original porch with simple turned columns. Shedd moved to a 22 room Gothic mansion in Kenwood after living here. Shedd (1850 – 1926) was the second president and chairman of the board of Marshall Field & Company. Under Shedd’s presidency, Marshall Field’s became the largest store in Chicago and the largest wholesale and dry goods company in the world. Although he donated $3 million to start the Shedd Aquarium in the early 1920s, he never saw it built, as it opened in 1930, 4 years after he died.

Fieldhouses like the Shedd Park Fieldhouse were built to serve as the centers of recreational activities in the City’s smaller parks in working-class neighborhoods. The original 1917 portion of the fieldhouse was designed in the Prairie style by William Eugene Drummond, a protégée of Frank Lloyd Wright and one of the City’s most skilled designers in the Prairie tradition. The building’s rear gymnasium addition, also designed in the Prairie style in 1928, was the work of the architectural firm of Michaelsen and Rognstad who produced a variety of excellent historically inspired designs in Chicago, including large fieldhouses for Humboldt, Garfield and Douglas Parks. The fieldhouse was named for Chicago entrepreneur and philanthropist John G. Shedd, who donated the land for the surrounding park which also bears his name. This fieldhouse is a Chicago Historical Landmark.

On the way back to your car, meander up and down the residential streets off 23rd to get a feel for the way people live in the neighborhood. You will see some interesting landscaping as well as some religious shrines in their yards. There are murals sprinkled on buildings around the neighborhood.

13.) Drive to Manuel Perez Memorial Plaza at 26th and Kolin before leaving

If you’d like to see one last sight before leaving, drive west down 26th Street to The Manuel Perez Memorial Plaza, a small park featuring murals and mosaics honoring Manuel Perez Jr., who was posthumously awarded the Congressional Medal of Honor for his actions in the Battle of Luzo, Phillipine Islands in February, 1945, a month before he was killed in action.

If you are a member of Map My Walk, here is the link to send map to your phone: Little Village Walk