Where it is located: This is Walk #10 on the Walks Location Map .

How we got there: We drove. There is abundant, free street parking. You can check other public transportation options with the CTA Trip Planner.

Marge’s comments: What a delightful walk this was! Most notable is the historic district which contains houses from 1880 – 1940. The homes are laid out on curving streets with nice setbacks. Parks and green space are sprinkled all over the district. The trees are huge and I imagine it would be the perfect walk to take when the autumn colors peak. This is a walk for peaceful meandering and chatting with the neighbors who were outside everywhere on the day we were there. We ran across them sitting on their porches, doing yard work, walking the dog or hustling children to and from activities. We even came across a block party where we were welcomed and offered a beer! Make sure to stop in the Norwood Park Historical Society where a docent will give you a tour of the Noble Seymour Crippen House (in which it is housed) and tell you the history of Norwood Park and some of its residents.

When you are driving on the Kennedy Expressway, did you ever wonder what lies just over the retaining wall?  This idyllic neighborhood with curving streets, parks everywhere, and free range children would be the farthest thing from your mind.  It is rich in history and yet is quite livable today.  A jewel hiding in plain sight.

Printable PDF of the Walk: chicago-neighborhood-walk-norwood-park 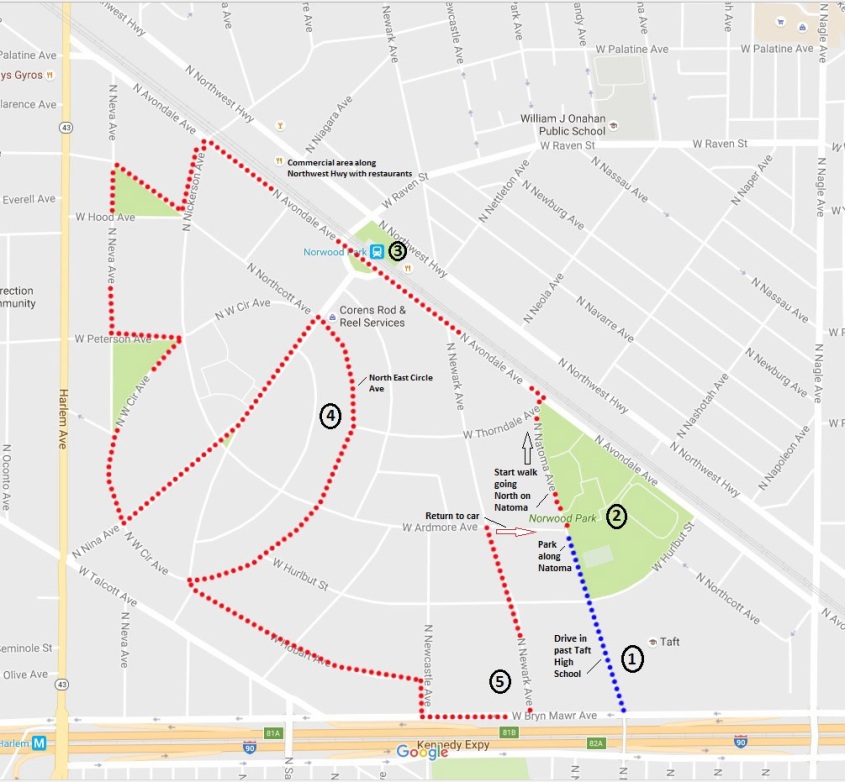 In 1833 Mark Noble filed claim to 150 acres of land in the area. He built a frame house on a glacial ridge and lived the life of a gentleman farmer. Today his home, at 5634 North Newark Avenue, is the oldest building in Chicago and home to the Norwood Park Historical Society.

Other farmers followed Noble. Then in 1868, a group of Chicago investors purchased 860 acres near the railroad for real estate development. Taking their name from a popular novel (Norwood by Henry Ward Beecher, the brother of Harriet Beecher Stowe), they called their community Norwood Park.

The new town featured wide lots with expansive front lawns. Instead of following the rigid Chicago grid, the streets were pleasantly curved–one of them even formed a circle. Three small parks were laid out and hundreds of shade trees planted.

To promote development, frequent ads were run in the Chicago newspapers. It’s worth quoting one of them:

“Only 11 miles from the Court House on the Chicago & Northwestern, 30 minutes ride. Eighty feet above the lake on beautiful, rolling ground, perfect drainage. No malaria, no saloons, no nuisances of any kind. Good society, churches, graded schools, stores.”

New settlers arrived. They built large Victorian homes on the high ground near the ridge. As Norwood Park grew, the residents saw the need for city services. In 1893, they voted to become part of Chicago. Today the historic heart of the original town is called Old Norwood. (from Norwood Park, Past and Present, WBEZ Blog, by John R. Schmidt)

This walk encompasses only the “Old Norwood” neighborhood of Norwood Park.

Jim Jacobs, the writer of the musical, Grease, based it on his experiences as a student here.

The Norwood Park District purchased 14 acres for its first park in 1921. Site drainage began in 1922, and bath house and swimming pool construction shortly thereafter. In 1928, the park district added a fieldhouse with a 500-seat assembly hall.

The tracks were built in the 1850s and the current train station was built in 1907 and designed in the Prairie style by architects Frost and Granger. It is on the Register of National Historic Places. You can see it across the tracks as you walk along Avondale.  Before the roads were paved, the only way you could get from Chicago to Norwood Park was the train. The roads were often impassable. The job of the sole Norwood Park Police Officer was easy. He parked himself at the train station and watched everyone getting off the train. If he didn’t know you or you couldn’t justify why you were there, he sent you back on the train!

Although most streets in the district feature historic homes, large trees and curving roads, the Circle Avenues are unique for their size and presence. It is believed that informal horse racing took place around the circle in the old times followed by car racing after the circle was paved.  The Circle Avenues were the first streets to be paved in Norwood Park.

When we popped in, a docent was on duty and gave us a tour of the house which acts as a museum for the historical society. The docent will tell you about the history of the house, the area and some of its residents. The museum collection has old photographs, letters and artifacts found in the area. They even have a hollowed out log which served as a water main back in its day. This is a worthwhile stop!